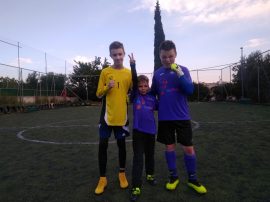 The review about our spring Greek football camp in 2019!

From 18 to 28th of April, our football camp was held in the Greek city of Loutraki, which we held together with the Estonian club Levadia! The Sport Planet Care Service personally went to the Greece in order to see all the delights and shortcomings of the spring football camp!

Alexander met our group from Moscow at the airport and took us to a sports complex. Passing through the Greek expanse, everyone noted the excellent roads, which are equipped with bridges, overpasses, now and then cut into the rocks and break through the rock through underground tunnels. About 100 km. of the road and we are in the city of Loutraki, which is very small, but still the promenade of the city deserves attention for its beautiful views and beauty. There are a lot of private small shops in Loutraki selling delicious pastries, fresh bread, meat and milk, and restaurants offering visitors a local treat – frozen yogurt and Greek feta cheese with olive oil. 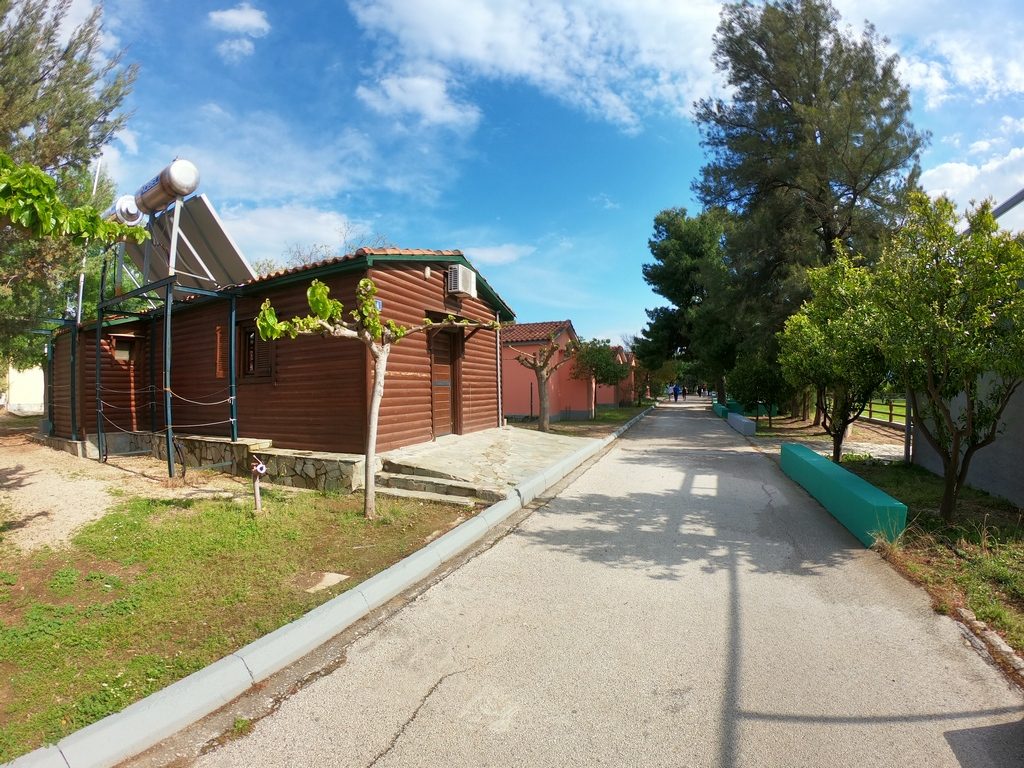 Living houses in the greece camp

When we get the football base it started to rain, after half an hour the sun came out again and after another half an hour there were no traces of rain at all. For such places near the sea and the mountains, a similar changeable climate is characteristic and this did not bother us at all. We started our acquaintance with the base from the administrative building, where we were quickly told to hurry to the dining room for lunch, since we arrived at about three in the afternoon. The dining building consists of 3 halls, which were all full of children, adults, there was a crazy noise, but we were still sent to a separate room where we could choose either spaghetti bolognese, chicken leg or beef steak. In general, in the future the cuisine was not so diverse, but each meal we had a choice of a couple of dishes and side dishes, there was always a huge amount of cheese and feta cheese, honey, jam, fresh vegetable salad, and, surprisingly, there was good thick soup in the lunch. The guys could take the addition meal as much as they wanted. 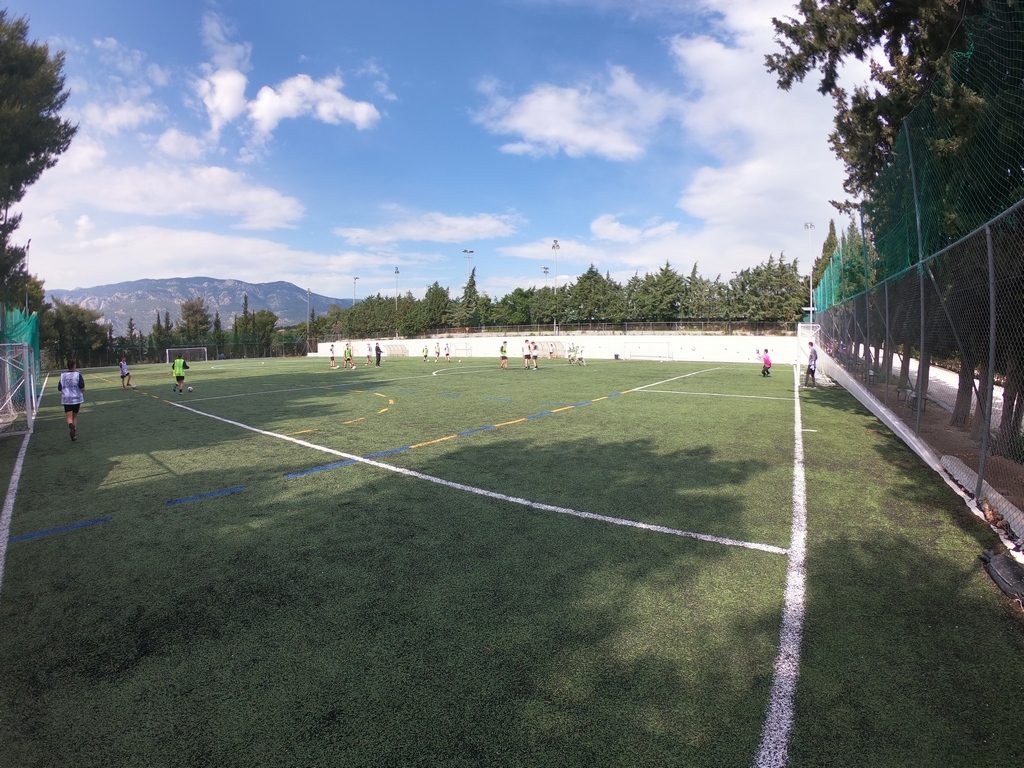 The main field in the greek base

But the most amazing thing in the base is the incredible aroma of a mixture of lilacs, tangerine flowers, olive trees and pines. The breeze surrounding the mountains from all sides, birdsong and smells. And also cats)).. huge amount of cats, what the staff asked not to feed at all. The base has several dozen houses, where the guys live per two, four, six, and even in the summer per sixteen people. The base is buried in greenery, tangerines and oranges grow directly on the trees, there are pomegranate trees, huge pines with an unrealistic number of cones. And there is real mineral water flowing the from the taps! 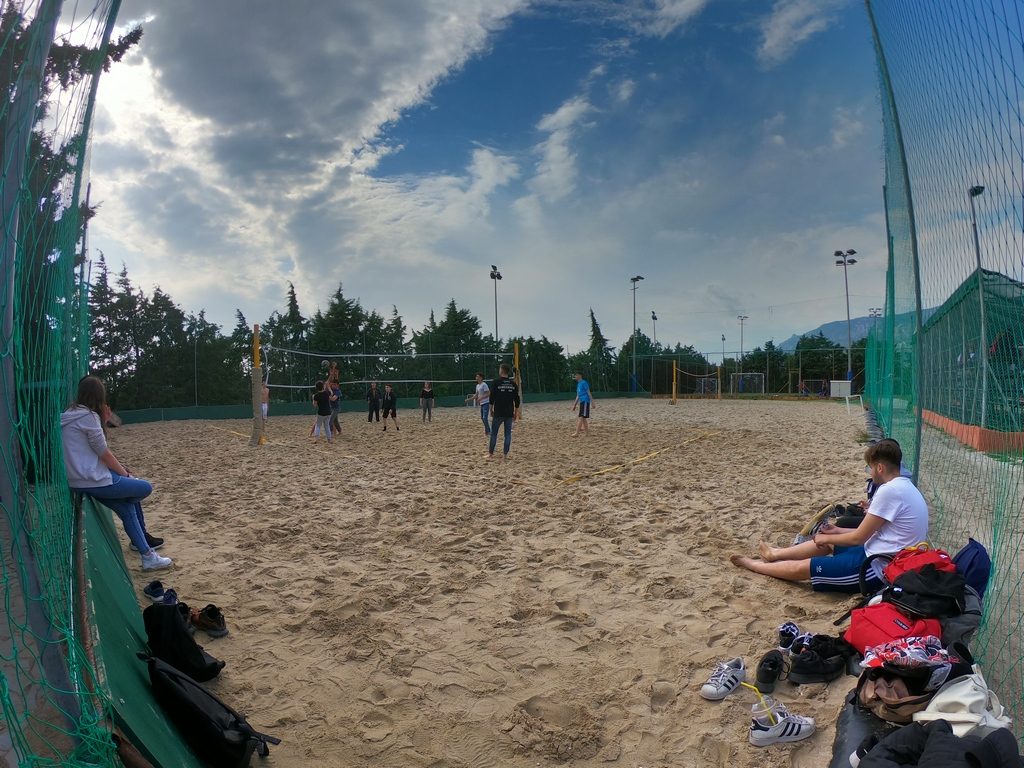 The sand pitches in the Greek base

There is one large artificial football field at the base, plus there is also a smaller field and a very small field was near our house, where we were settled. The first evening we tested it and trained. In addition, there are two swimming pools with warm water, but upon arrival the water was clearly cold. Also the base has six sand pitches for beach volleyball, many tennis courts, three basketball pitches, a huge number of table tennis tables and an outdoor cafe where children can buy snacks and sweets. Near a large field, we found several targets for archery. 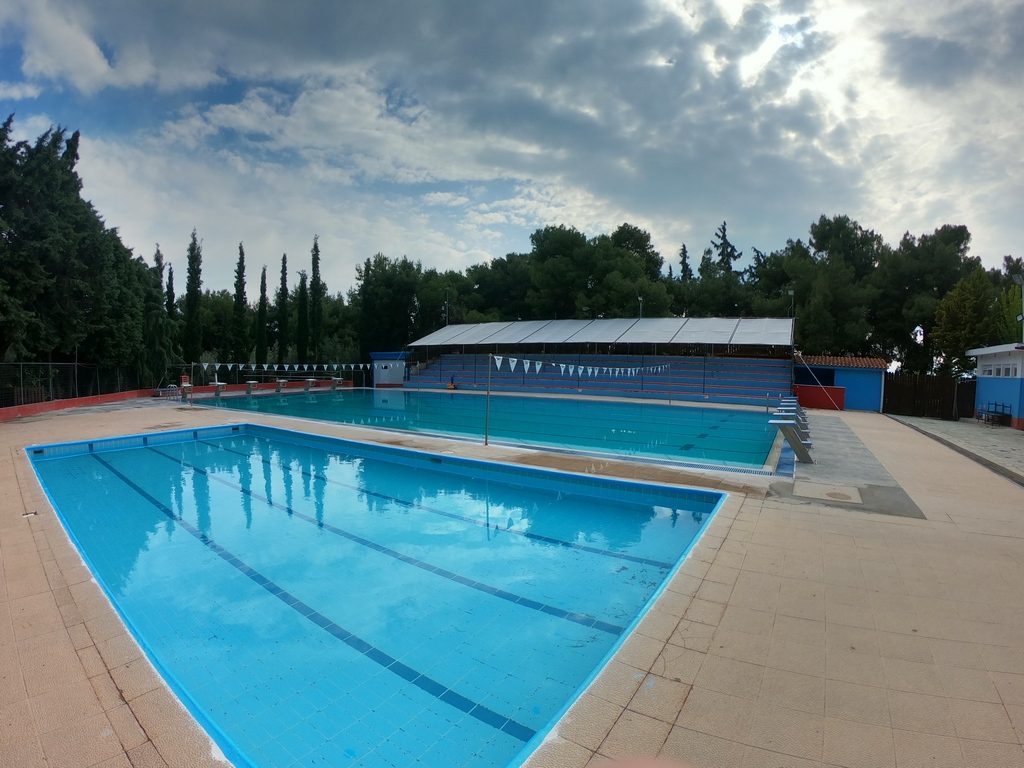 Small and big water pools in Loutraki base

After the first dinner, we returned to the reception, where we got the keys and remotes from the air conditioners, what caused some misunderstandings, as it was obviously not hot, but later it figured out that the air conditioners are clearly needed during the night, as the temperature drops below 5-8 degrees and on the first night many guys were froze.The next nights we were already taught and in our rooms it was warm and comfortable. By the way, I really liked the beds with high mattresses and soft, pleasant linen. Early days, it figured out that somewhere the lamps did not work, the switches or something was missing, but local workers quickly eliminated all the dysfunctions. 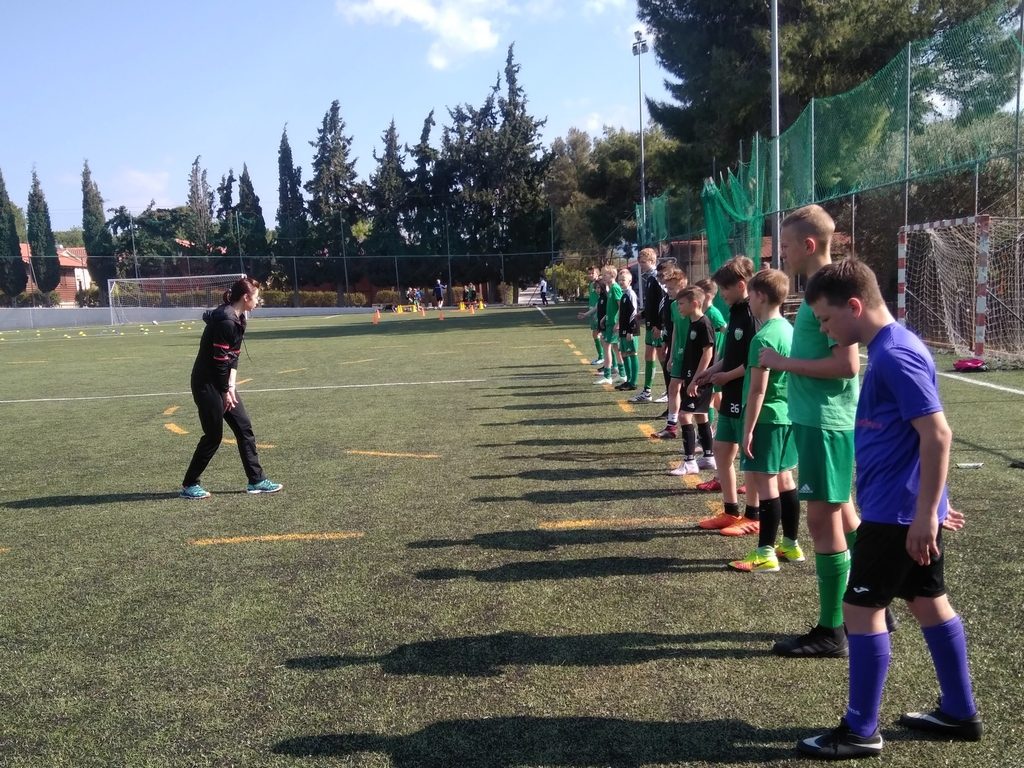 Trainings with athletic coach in the football camp

At night, the main group from Estonia arrived and the next day they started full-fledged training, which invariably began with a session of a running technique with coach Natalya and ended with the football part with Sergey. In addition, immediately on the second day we were offered to play two friendly games with the youngest children, where our guys didn’t blown apart in the Greeks. On the evening of the second day, we tested the guys in the exercises: a 4*1 square, a 1*1 game, and the guys passed the juggling and the force of hitting the ball with both legs. All results were analyzed and reported to the coaches. And later, our young intern Mika prepared several musical acts with the guys and they sang and danced them so loudly and fervently, which clearly surprised the Greek athletes and German swimmers who were also at the base at that time. 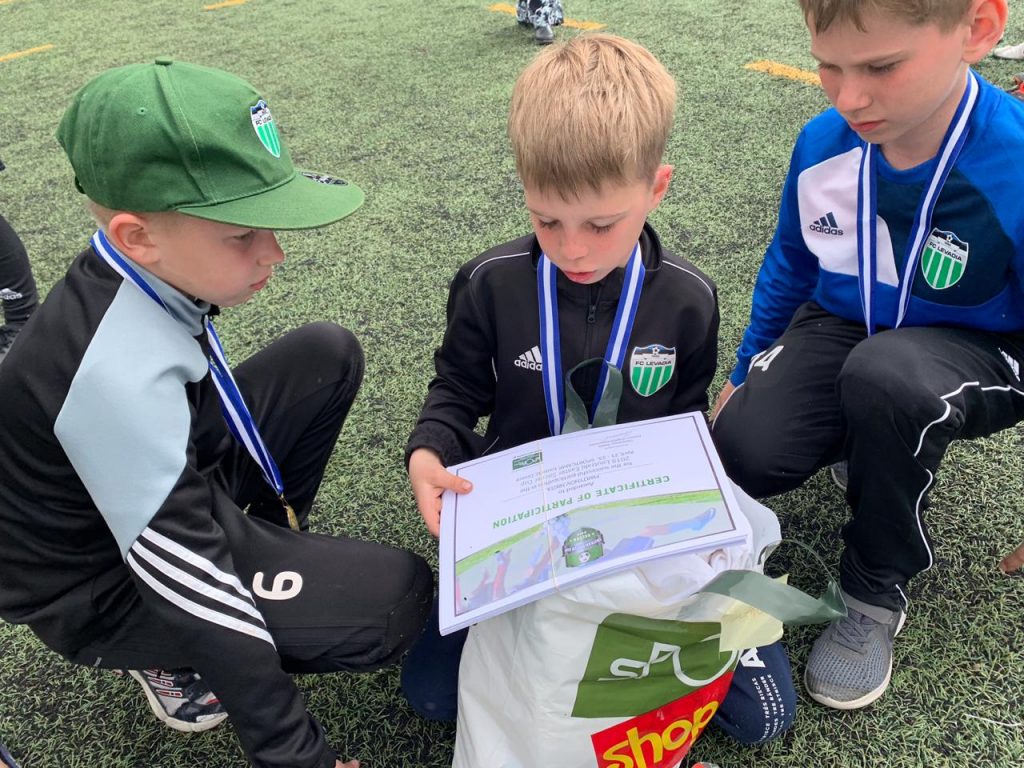 End of the tournament in Greece

On the third day, a football tournament started, where several Greek, Russian and Estonian teams participated in different age categories. For any reason, our opponents always turned out to be a year older, but that didn’t bother our guys and they did a great job with the first matches and the starting spurt. The little ones won the first two matches with a big score, the elders also managed to win the first game in a bitter struggle, but the subsequent matches did not go so smoothly and according to the results of the three-day tournament, the younger ones took second place, and the eldest only sixth from twelve teams. 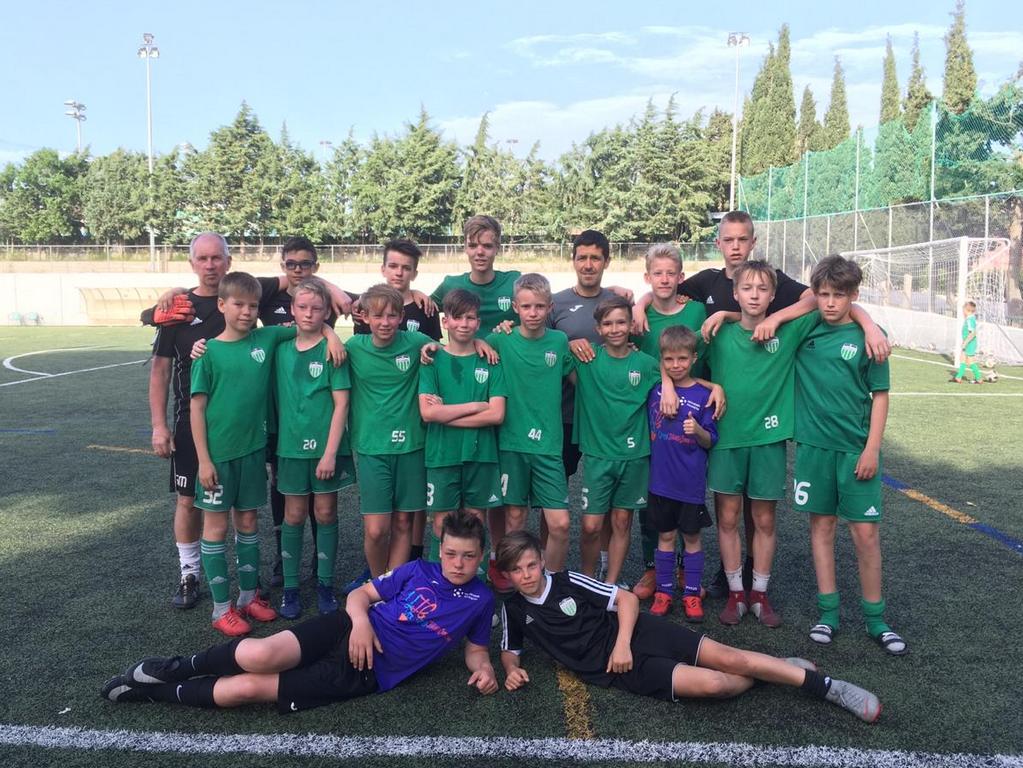 By the end of the tournament, the Spanish coach Carlos Roman arrived and, together with him, the whole group had a several friendly matches – for example, the older guys played with team from Australia and won 2-1, and the younger ones fought with the Estonian team Joker, who also came to the tournament and won 4-0. By this time, heated water in the pool and the boys were able to fully enjoy the vigorous splashing in the water. Well, of course, a series of training sessions under the control of Carlos began, where the exercises for ball control and the correct location on the field prevailed.

Once evening we went for a walk along Loutraki: we were shown a large navigable Corinth Canal connecting the Ionian and Aegean Seas. The channel depth is more than 70 meters and the view from above was simply charming. It reaches about 6 kilometers in length and now it saves to sailors a huge amount of time for cargo delivery. This day, the guys still walked along the promenade, did the rides and enjoy ice cream. Upon his return, as usual, Mika came up with various games for the guys, which gave them the opportunity to relax after exhausting sessions!

We really liked the Greek base and its nature, natural food and a mild climate. Soon we will begin to pick up children in the autumn football camp. In the meantime, choose any of our summer football camps in Bulgaria, Crimea or Barcelona – the same great experience will be guaranteed!

LOOK TO THE FOOTBALL CAMPS ANNOUNCES